It begins in 1980; Jean Claude Briavoine and Bernard Clerisse decide to run in the Paris Dakar with a Niva, they are helped by the French Lada importer, Jean Jacques Poch; the car has the n° 128 and did not finish. Three other Lada Niva, private entries will see the finish line.
In 1981, two “works” cars are entered, for Jean Claude Briavoine and André Deliaire, n° 157 and André Trossat and Pierre Richard, n° 158, Briavoine is 3rd and Trossat 11th at Dakar.
For the 4th edition in 1982, no less than four cars are entered: n° 159 for Jean Pierre Kurrer and Eric Briavoine, Jean Claude’s son, n° 160 for Jean Claude Briavoine and André Deliaire who will finish a superb second place, n° 161 for André Trossat and Pierre Richard, and n° 162 for Alain Oger and Laurent Leboth. Cars 159, 161 and 162 did not finish.
The car n° 160 is reproduced in the Gaffe range, ref.2701. 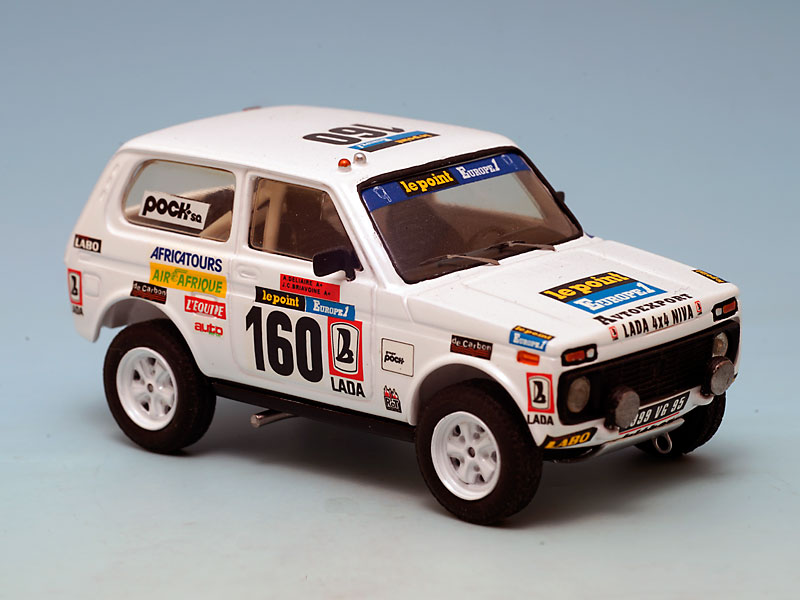 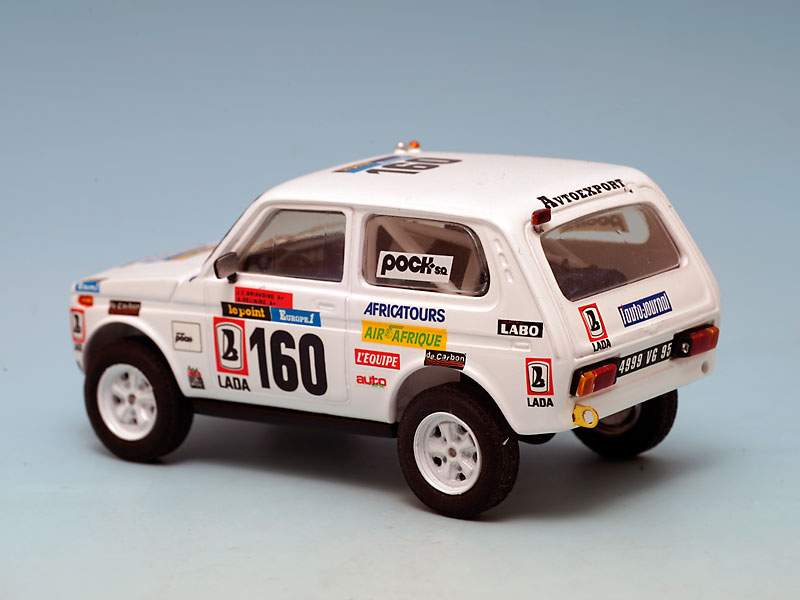 In 1983, The Poch Niva are there again with Jean Claude Briavoine and André Deliaire in the car n° 156, finishing 36th, and André Trossat and Eric Briavoine in the n° 157, who will arrive 2nd at Dakar, a third car is entered, n° 211 for Martine de Cortanze and “Nanouk” de Bellabre, they will not finish.
These three cars can be reproduced with the kit ref 2603, with a more detailed kit than the first edition in 1983 which only offered the n°156 decals. 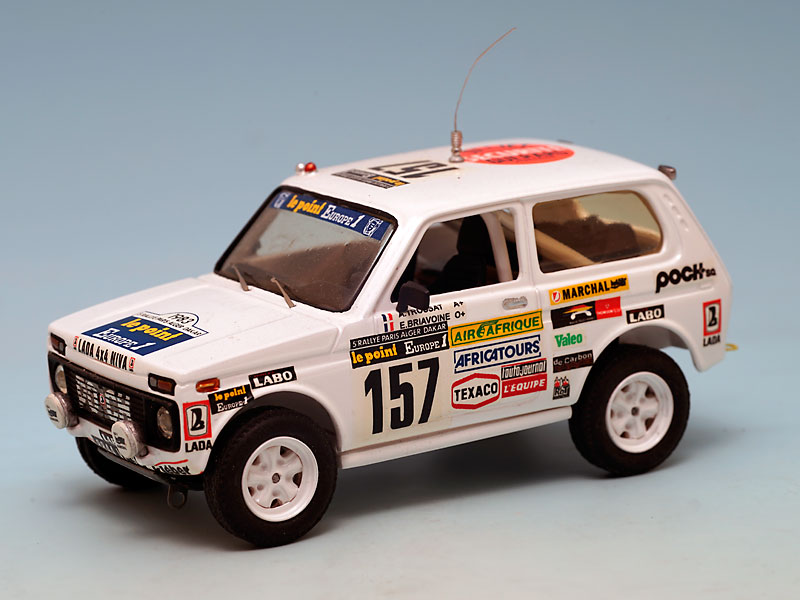 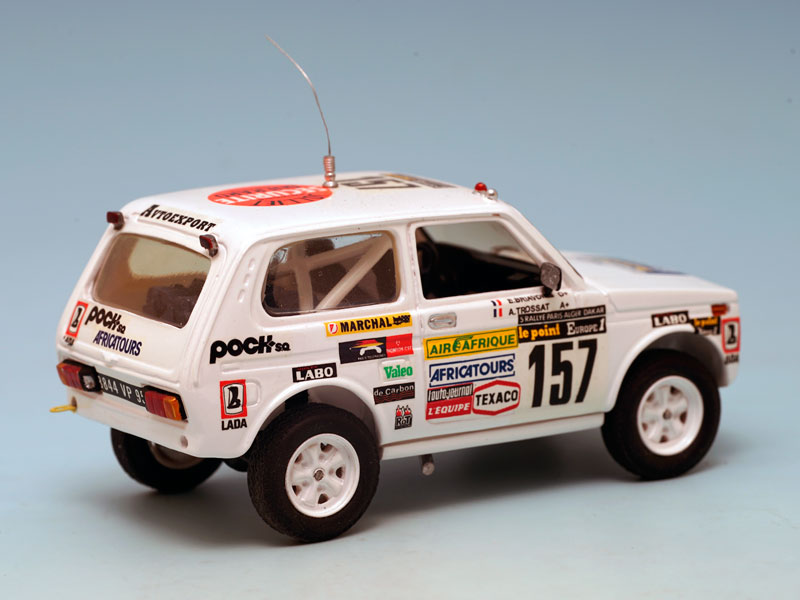 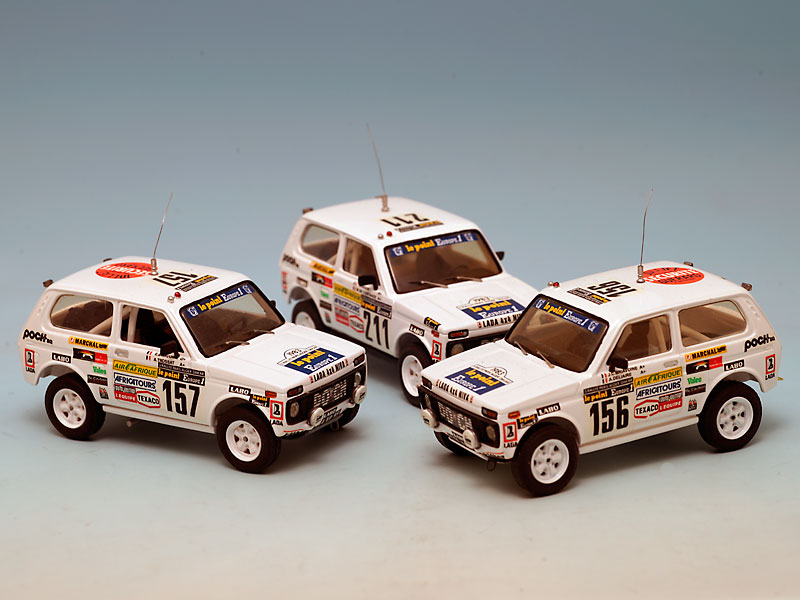 For 1984, a new car is developped, with a longer wheelbase, it gave a longer bonnet and a rear wheel arch more at the back of the car. Jean Pierre Jabouille, well known French Formula 1 driver and Michel Sardou, a popular French singer wore the colours of VSD Pastis 51 in the car n°182, when the Poch team white cars were n° 179 for André Trossat and Eric Briavoine, n° 180 for Pierre Lartigue and Jean Charles Djaoui, n°181 for Bernard Darniche and Bernard Giroux, another car not lengthened, n° 178 for Claude Laurent and Laurent Leboth is also entered. None of these entries will see the finish line, mainly due to shock absorbers failures.
All can be reproduced, ref 8402 for the colourfull n°182, and ref 2702 for the n° 179, 180 and 181, a more detailed kit than the ref 8401. The car n° 178 can be made with a kit ref 2603 and a 2702 decal sheet, ask for it if you order. 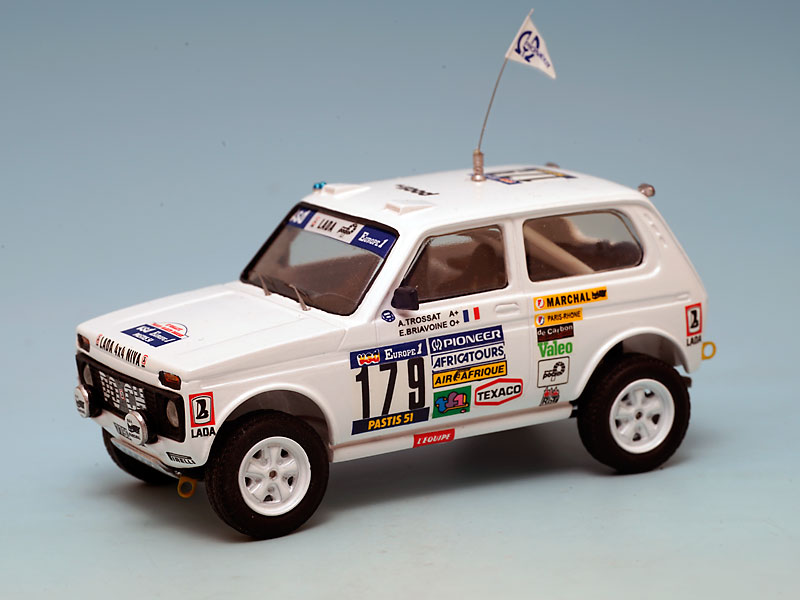 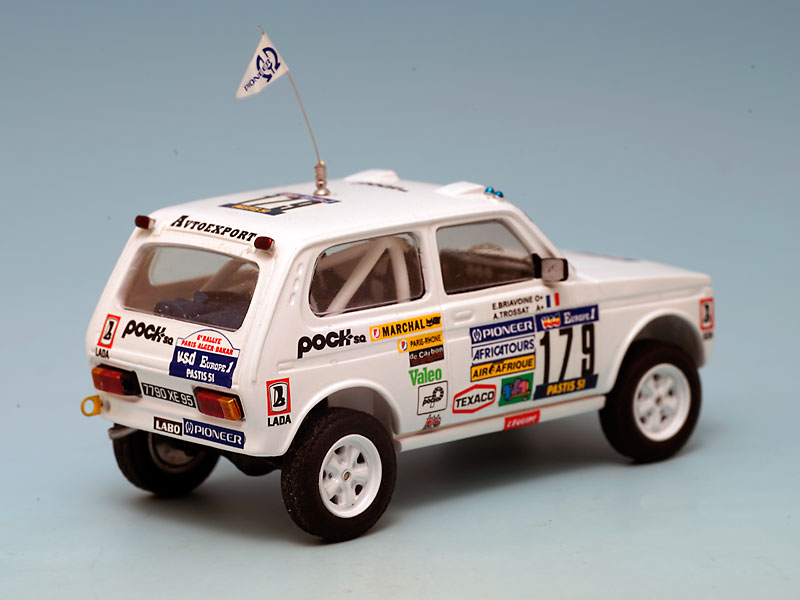 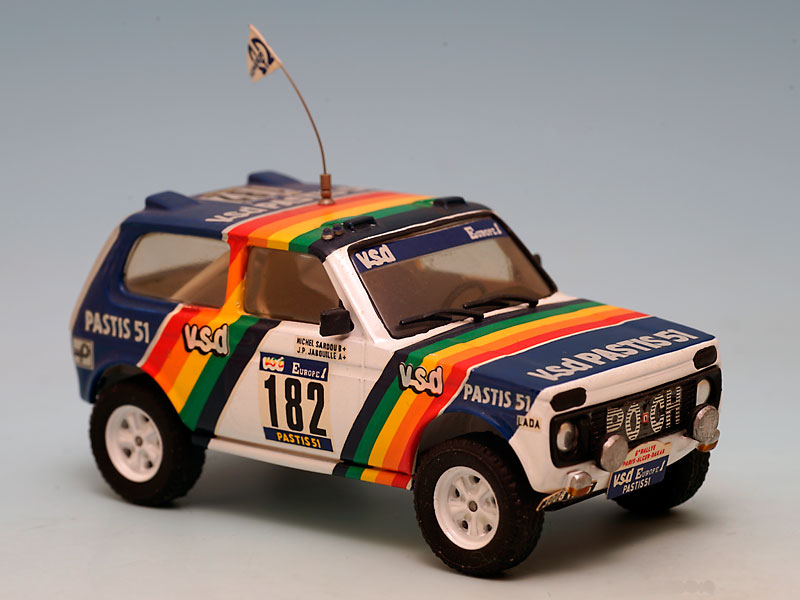 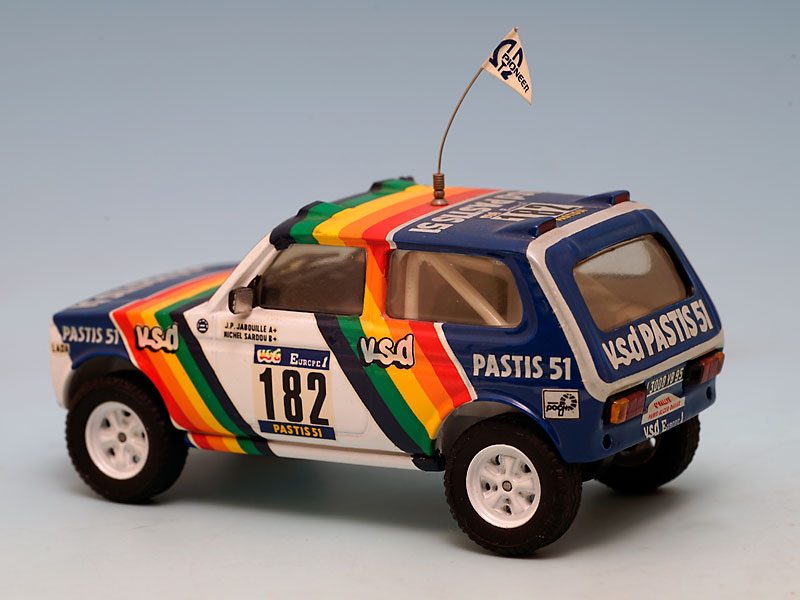 In 1985, Jean Pierre Jabouille realised a big evolution of the Niva, with a PRV V6 engine, completely new suspensions and a more aerodynamic body, three cars are entered, with a Pastis 51 France Soir Magazine sponsoring. Three cars are entered for Jean Pierre Jabouille, n° 191, Jean Louis Schlesser, n° 192 and Pierre Lartigue, n°193. The three cars broke their suspensions and did not finish.

Two other cars, in fact 1984 entries, are entered for André Trossat and Jean Charles Djaoui, n° 209 and Michel Gendre and François Gauthier, n° 210 with a VSD colourful livery. These cars can be reproduced with a ref 2702 kit and a decal sheet available by Cubalille…………..

In 1986, Poch is back on the race with two cars, a basis of the 1984 protos with an improved engine, the car n° 197 for Bernard and André Marreau the brothers who won the race in 1982, but they will not finish, and the car n° 198 for Pierre Lartigue and Bernard Giroux, they will get a fourth place at Dakar.
These cars can be reproduced with the kit ref 2703. 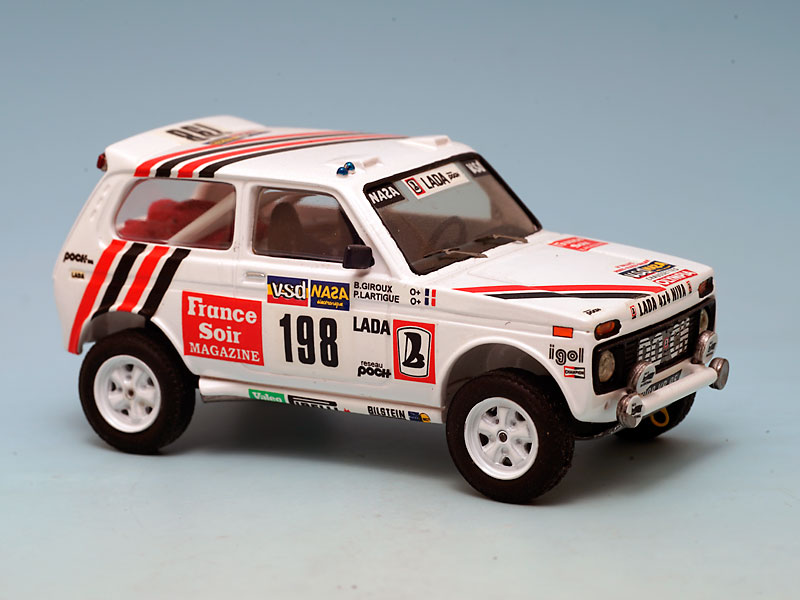 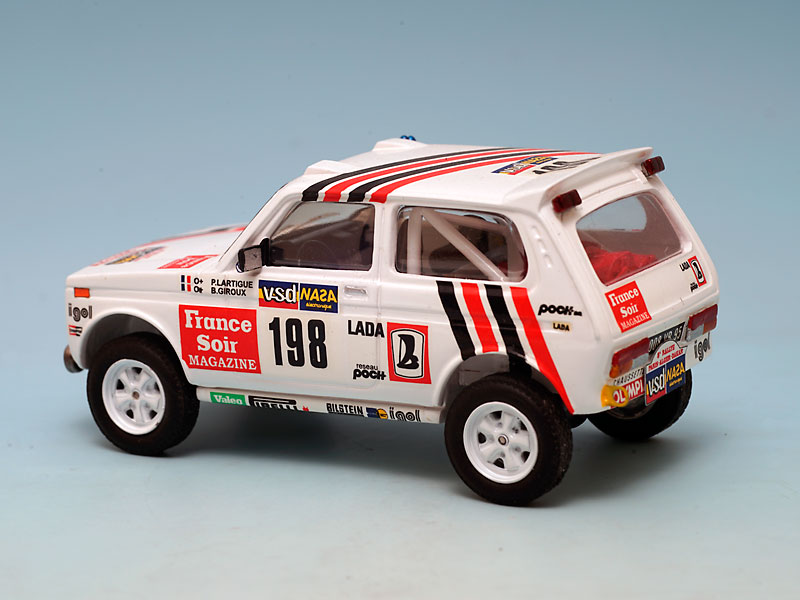 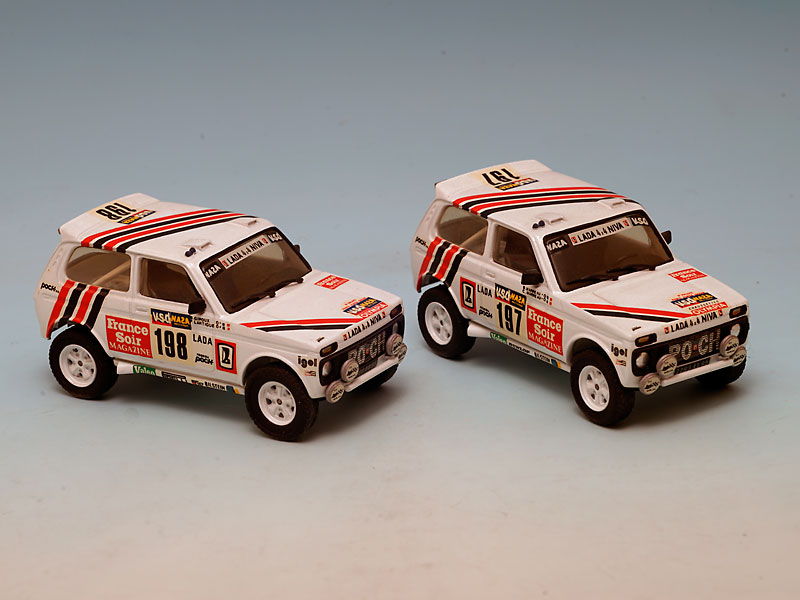 For the 1987 edition, three cars are entered, slightly modified 1986 models, the n° 185 is for Jacky Ickx and Christian Tarin, and wears the Solupla colours, the two others wear the now classic Poch colour scheme, the car n° 186 is for Pierre Lartigue and Jean Luc Roy, the other, n° 187 is for Gérard Marcy and Thierry Gérin, the three cars did not finish the Rally.
The Jacky Ickx car is reproduced in the Gaffe range under the ref. 8809, and it is possible to make the two other cars with a 8809 kit and a decal sheet of the ref.2703, just ask for it when ordering. 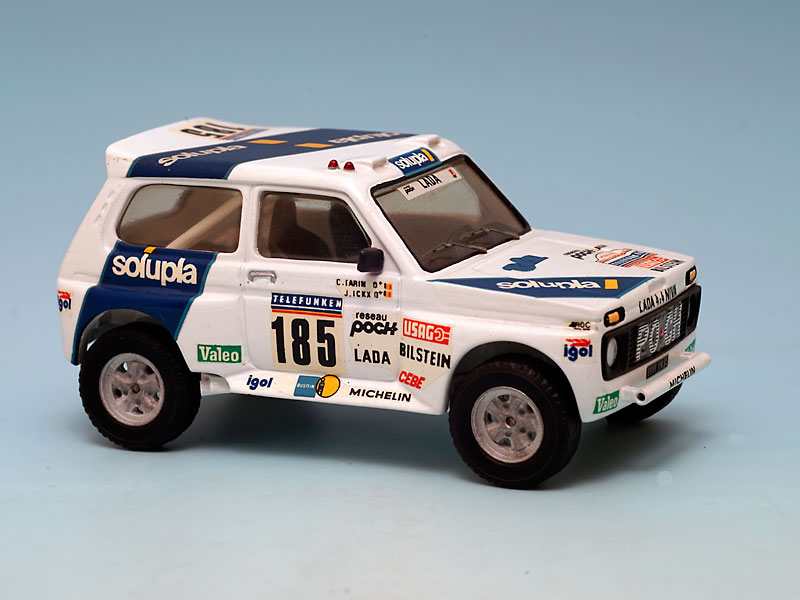 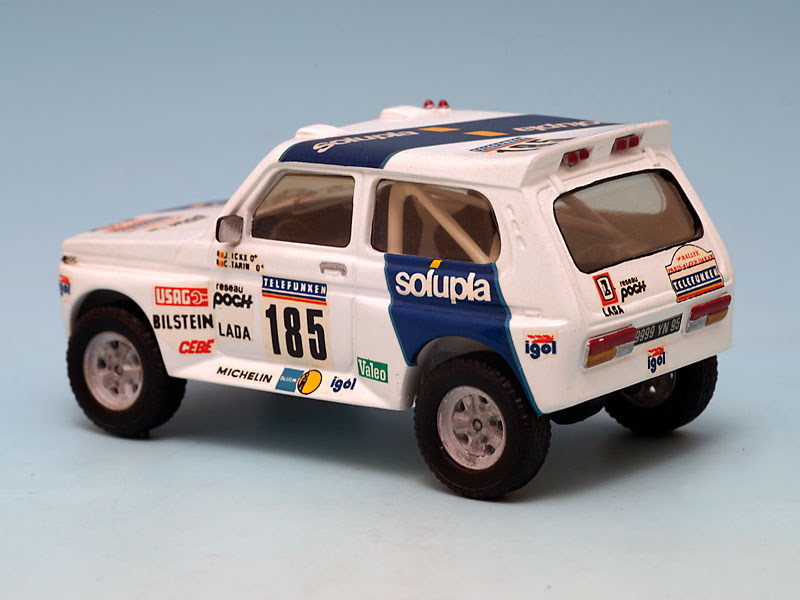 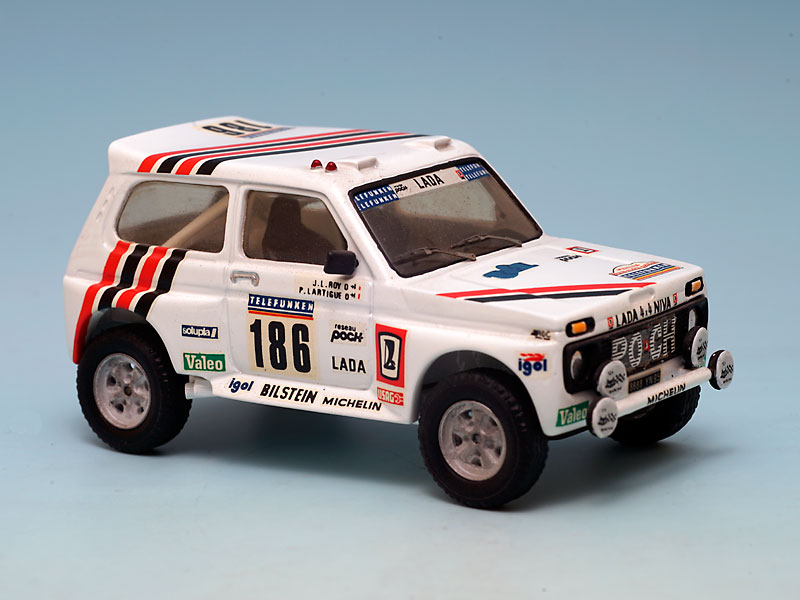 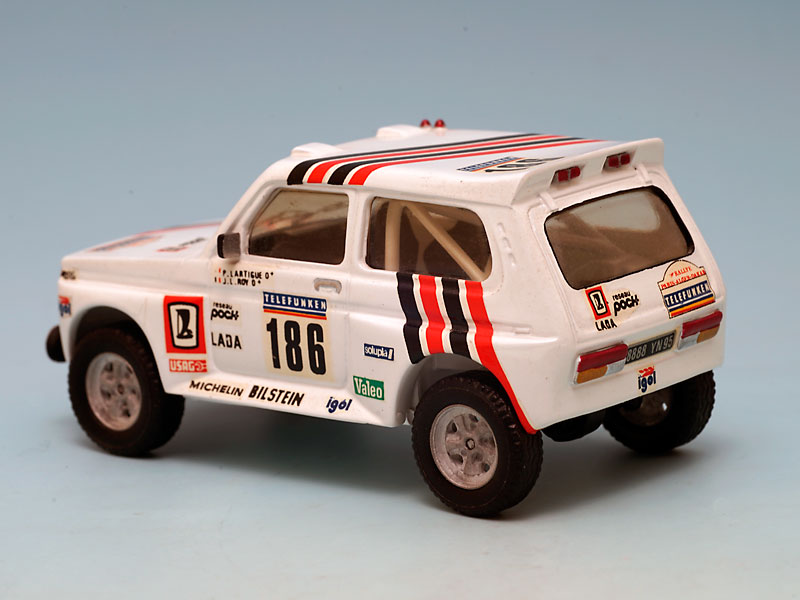 1988 will be the last year with Niva Poch entered in the Dakar, the cars are the same as the 1986 ones, painted with a nice candy white and a black and red scheme seen also on the  sailing ships entered in the transatlantic races for Loïc Peyron with some success! Loïc shares the car n°219 with Jean Pierre Jaussaud, the car n° 218 is for Jacky Ickx and Christian Tarin. Only the n°218 will finish, after a spectacular roll over in the sand dunes, in 38th position.
The kit ref 9714 reproduces one or the other car. 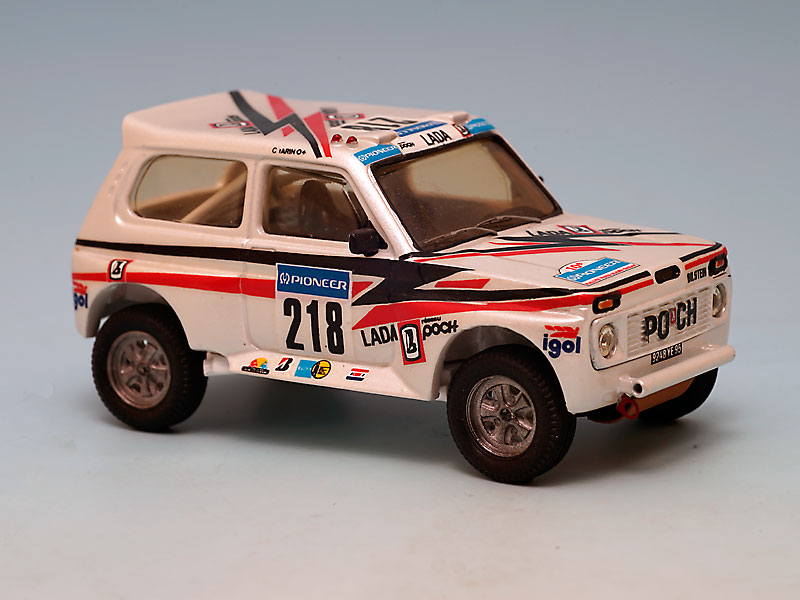 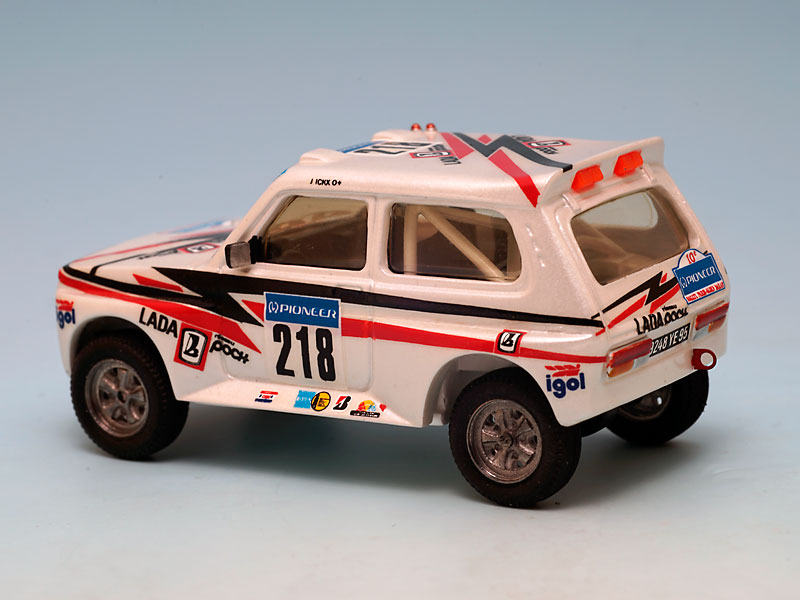 There will be no more Poch Niva entered in the Dakar race, the French importer who entered them in virtually all the Rally raids since 1981 with some great success, but never won the Dakar, will be back in the 1990 edition, with a Lada Samara prototype, developped with the aid of Jacky Ickx and a Porsche engine………………

This is another story !

To get prices and conditions or informations about models
Scroll Up